A question I often get from pre-optometry students is, “How can I get more involved with optometry before I actually start optometry school?”

The American Optometric Association (AOA) is optometry’s national political organization that works to advance the profession.  Optometry has come a long way in its 114+ year history and that didn’t happen all by itself. The AOA’s membership are made up of the men and women responsible for seeing to it that necessary legislation was and is passed, creating this wonderful profession that you are as future doctors of optometry will inherit.  Optometry in the United States and Canada is more advanced, with a scope of practice that includes practice privileges like therapeutic pharmaceutical drug prescribing, laser, and even surgical privileges—all thanks to what the AOA has spearheaded.

Scroll to the bottom of this page, click on the flyer which will take you to the AOSA’s blog page where you may join.

Here is an article written by SCCO’s Class of 2017, Briana Livingston, SCCO’s current AOSA Trustee, who serves as the student liaison with the AOA.  She explains how her perspective about being involved in the profession has changed as a result of her journey.

“Why the AOSA is Important to Me”

By Briana Livingston, SCCO Class of 2017

When I moved to California to attend SCCO, I knew I would be learning a lot about eyes.  What I did not expect to learn was how much more there is to being an optometrist.

I can still remember being in undergrad when the only thing I could think about as my main goal in life was simply getting accepted into optometry school.  Then when I moved out here, my goals automatically shifted to graduating and receiving my doctor of optometry degree, and I mentally skipped over all the accomplishments I wanted to have in-between.

Becoming a part of AOSA allowed me to realize that obtaining an OD degree is merely a precursor to this profession.  The AOSA is an affiliate of the American Optometric Association and is the largest optometry student organization representing over 6,500 students.  The mission of the American Optometric Student Association is to “improve the visual welfare and health of the public, to promote the profession of optometry, and to enhance the education and welfare of optometry students.” At various conferences and professional meetings, this organization continuously provides students with the opportunities to network with practicing optometrists and students from other schools.  Members can always count on the AOSA Foresight magazine to keep them informed about current issues happening on the optometry scene.

Even for a pre-optometry student, becoming a member of AOSA is opening the door to a clearer and brighter future! 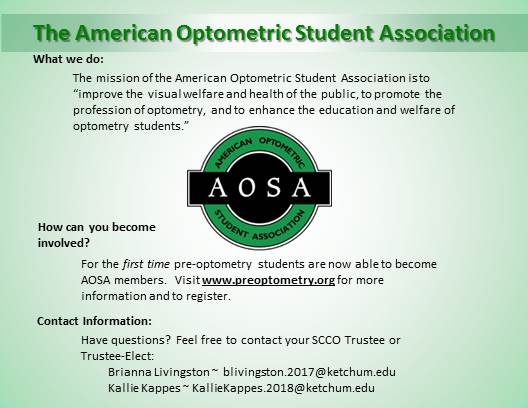