This tip came from Mallori Aschenbrenner, SCCO Class of 2013, who received the highest score on Part I of the NBEO board exams in March of 2012.  She’s worth listening to:

Don’t over-think the questions: I think it holds true for all types of standardized testing (including boards..eek!), but really relax and don’t over-think the questions. The tests are designed so that you won’t know every answer. Educated guessing based on context can help you gain a few extra points on questions that you really don’t know. Prepare as best as you can, but on the day of the test just let the cards fall where they may. If you think you don’t know the answer, ask yourself, “why are they asking this question?” Maybe something will pop into your head. 🙂

Good luck to everyone! Don’t stress too much..it’s a small stepping stone in the grand scheme of things. 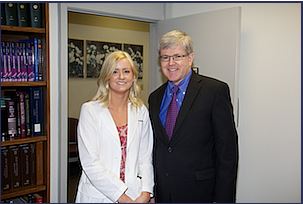 SCCO Optometric Intern Mallori B. Aschenbrenner, received the highest score in the country on the National Board of Examiners in Optometry Part I Applied Basic Science Examination. A member of SCCO’s Class of 2013, she is pictured with College President Kevin L. Alexander, O.D., Ph.D.

Mallori B. Aschenbrenner, a fourth-year optometric intern at the Southern California College of Optometry (SCCO), received the highest score in the country on the National Board of Examiners in Optometry (NBEO) Part I Applied Basic Science Examination.  She has been named the recipient of the 2012 Dr. Norman E. Wallis Award for Excellence.  Overall, 1,811 candidates took the exam.”Mallori’s achievement is an outstanding testament to her, to our faculty and to our educational program,” said SCCO President Kevin L. Alexander, O.D., Ph.D.  “The College is indeed proud of all of our students who, like Mallori, study diligently to become exceptional providers of eye and vision care to our communities as Doctors of Optometry.”The NBEO award was established to honor Dr. Wallis’ 25 years of outstanding service as NBEO Executive Director and is given to the candidate who receives the highest score on the targeted or main Part I Basic Science Examination each year.

About the National Board of Examiners in Optometry

The award consists of a personalized plaque as well as a full refund of the Part I registration fee.  The Award will be presented at the Annual Meeting of the American Optometric Student Association (AOSA) by Dr. Nancy Peterson-Klein, President of the National Board of Examiners in Optometry, on June 28 in Chicago, IL.

Established in 1951, the National Board of Examiners in Optometry is a private, nonprofit organization that develops, administers, and scores examinations, and reports the results, that state regulatory boards utilize in licensing optometrists to practice eye care.  Licensure is a public interest, public protection regulatory function of many professions, particularly in the health professions, due to the importance of receiving competent care.  In serving the public and the profession for 61 years, the National Board has compiled a distinguished record of accomplishments that include being the first national board among the doctoral level health professions to eliminate grading-on-a-curve, and one of the few national boards in any profession with a repertoire of examinations that includes conventional multiple-choice tests (single- and multiple-response items), computer-based examinations, and a clinical skills test with standardized patients at the National Center of Clinical Testing in Optometry.

Tagged as: getting into optometry school, OAT, OAT preparation

I wanted to be an optometrist when I was only 10 years old. Why? I had some kind of geeky fascination with eyeglass frames, and was obsessed with getting a pair of my own. In my situation, having perfect eyesight was a distinct disadvantage, so I had to hatch a plan. After repeated intense squinting while looking at the blackboard, I approached my teacher and lied with conviction, complaining that I couldn’t see. This report got me first to the school nurse and then finally on to an optometrist for an eye exam, where I tried my best Mr. Magoo impression to no avail. I would have to wait two more long years until the gods finally smiled on me when, by some miracle, I acquired enough astigmatism to warrant my first bona fide pair of prescription eyeglasses! Along with my love of people and wanting to take care of them, subsequent visits to the optometrist and shadowing, I sealed the deal—optometry was now officially what I wanted to do with my life. I made first contact with the Southern California College of Optometry when I was in 8th grade. My older sister had a newly minted driver’s license and so I coerced her into driving me all the way from our home in La Mirada to Los Angeles, SCCO’s then-home. After a master planning effort to plot out our route on a paper map folded in 8 places, we arrived at SCCO where my sister quickly surmised that I didn’t have an appointment with an admissions advisor. She called me a loser, drove me all the way back home and the next day, phoned to help make the requisite appointment. I entered high school in the late 1960’s (ouch, that hurt) when young females wanted to be anything but what I’d chosen as my newly dedicated pursuit—a science geek. I wore thick horn-rimmed black eyeglass frames (told you I was serious) and hung around chemistry lab after class. This was at a time when women just did not pursue careers in science and being the tomboy that I was, that was fine with me. This trend continued right through into undergrad, attending many classes where I was the only female--bespectacled or not--in the class. At a recent high school reunion, many of my classmates still remember me as the science geek with the blinders on—many envious of my joy and passion for my future profession. I graduated from SCCO in 1977. Looking back with 40 years of experience as an optometrist, I am awed to know that I chose this wonderful profession way-back-when and with only my juvenile perspective to inform me. In 1977 when I graduated from optometry school, the profession began a series of major changes to its practice scope: securing the rights to use diagnostic drugs (dilating drops), securing the rights to prescribe therapeutic drugs (huge change!), being recognized as physicians by the federal government and treating glaucoma. In some US states, optometry has made even bigger strides into minor surgery, use of lasers, hospital privileges...etc. If I had the opportunity to go back and make another choice and knowing what I do today about health care and my own hardwiring, I’d make the same choice for optometry--nobody loves this profession more than I do. http://www.ketchum.edu/index.php/about/administration-directory I grew up with optometry and now it’s your turn to inherit its future. That’s what this blog is about—getting you into optometry school and I am just the person to help you achieve this goal. We’re going to talk about the admissions process, how to prepare to take the OAT, how to be a competitive applicant, how to prepare to interview, to name a few. We’re going to talk about SCCO, student life and what it’s like to be an optometric intern. I am very persuasive, motivating and I am completely sold on optometry as the best profession in health care. I speak from experience! Get ready to dialogue. Don’t be afraid to ask questions and please, chime in on discussions. I want to know what kind of help you need. You got this! View all posts by Jane Ann Munroe, OD, Assistant Dean of Admissions, SCCO